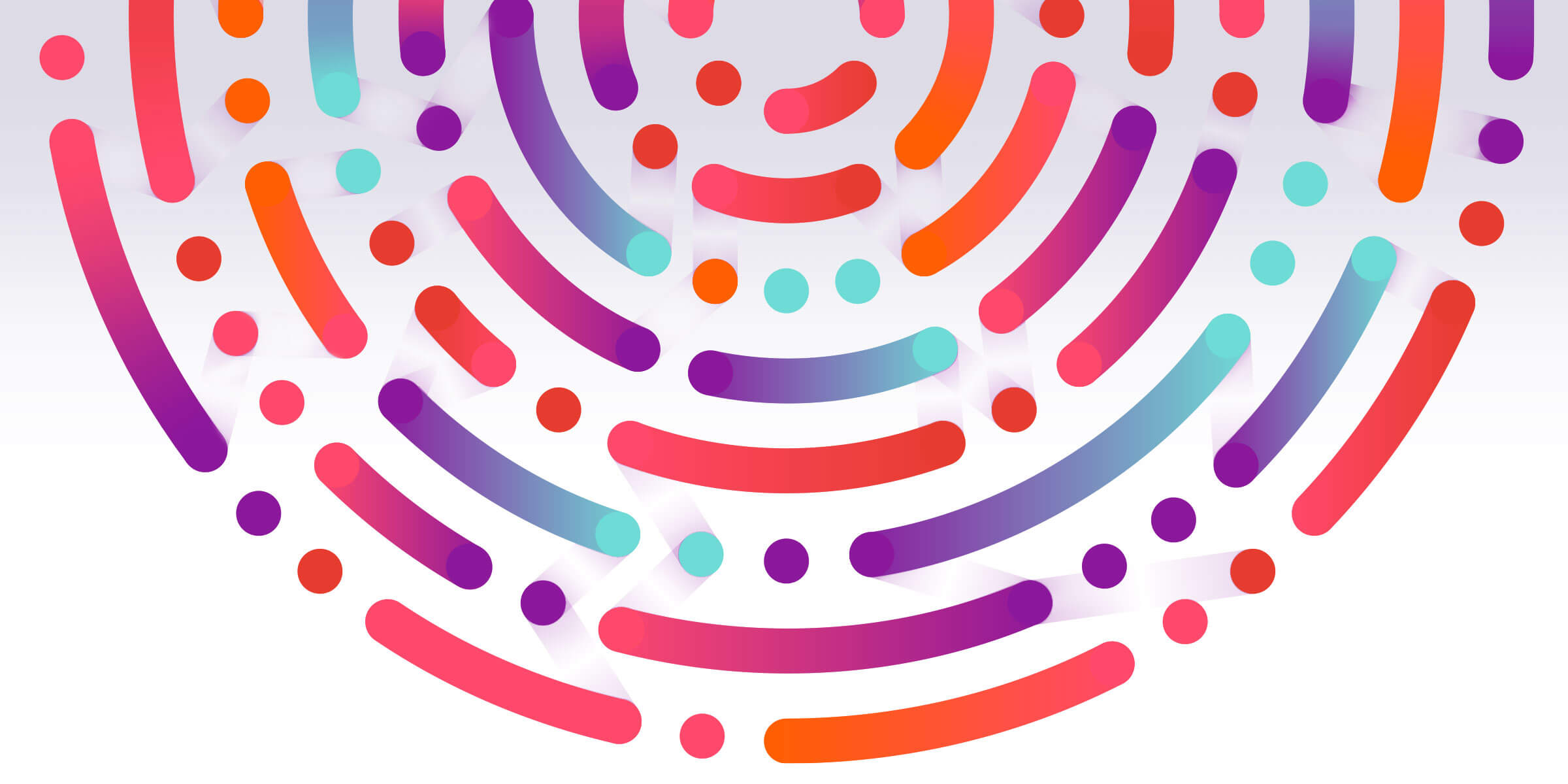 Beyond Research – Pathways to Impact was a showcase event celebrating RMIT’s cutting edge approach to research.

As the inaugural conference of RMIT’s Enabling Capability Platforms (ECPs), this special event encompassed three days of presentations and workshops across the eight interdisciplinary ECPs. 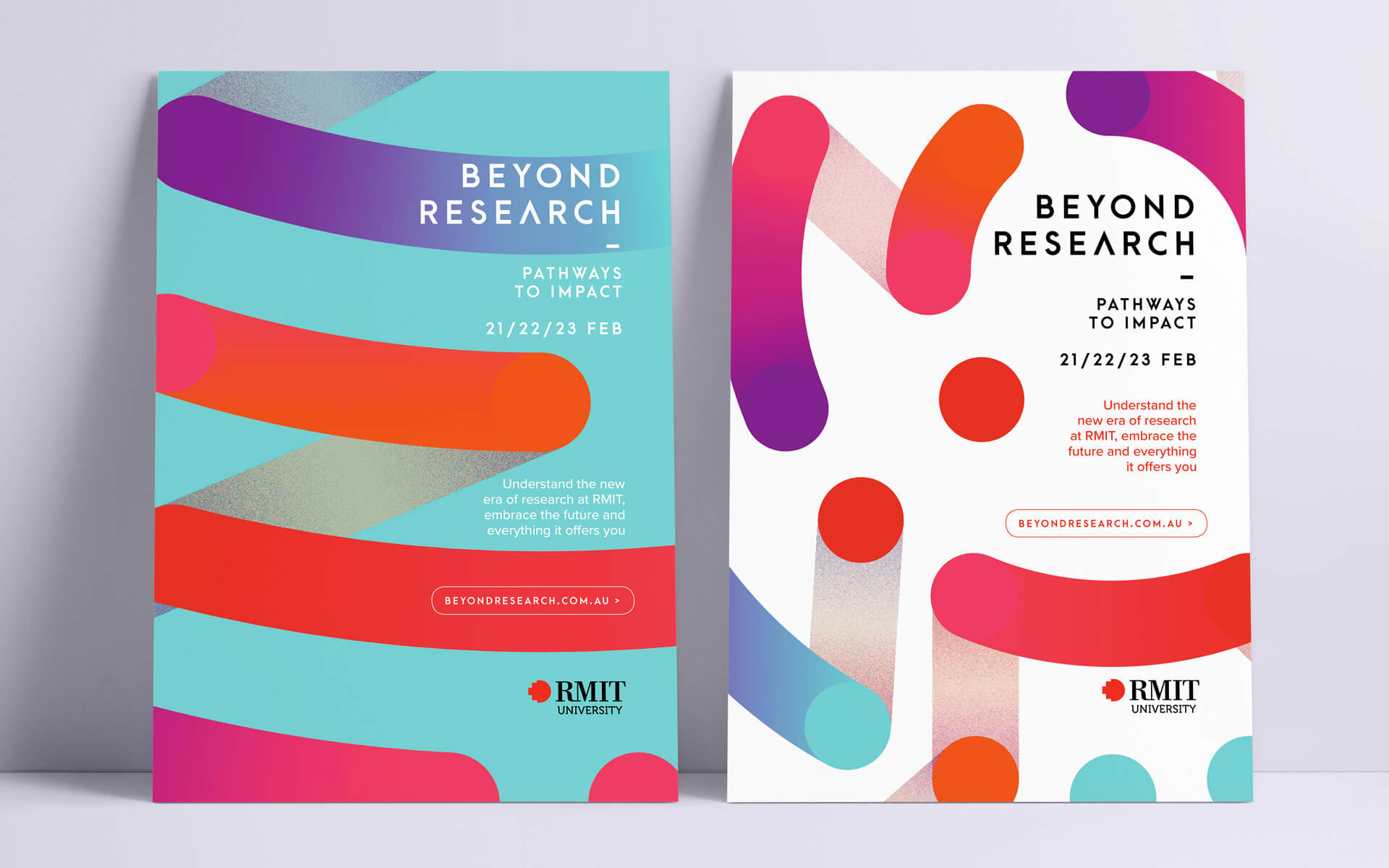 I worked with the RMIT and Wildwon team to create the event visual identity and communications to launch a change program surrounding RMIT's significant restructure.

The Beyond Research event visual identity was created using UX, research and immersion processes including personas, empathy maps and XD principles which resulted in a strong visual language that not only resonated with a broad range of stakeholders, but created an experience that was consistent and considered across all tailored communications, including of course, the three day conference.

One identity to engage eight platforms

To someone working in the biomedical research space, it may look like a petri dish, or to an engineer, a circuit board.

It was designed in a way that allowed for it to be scaled, cropped and rotated to show interesting visual communications across all media – creating different iterations that still feel like one cohesive identity. 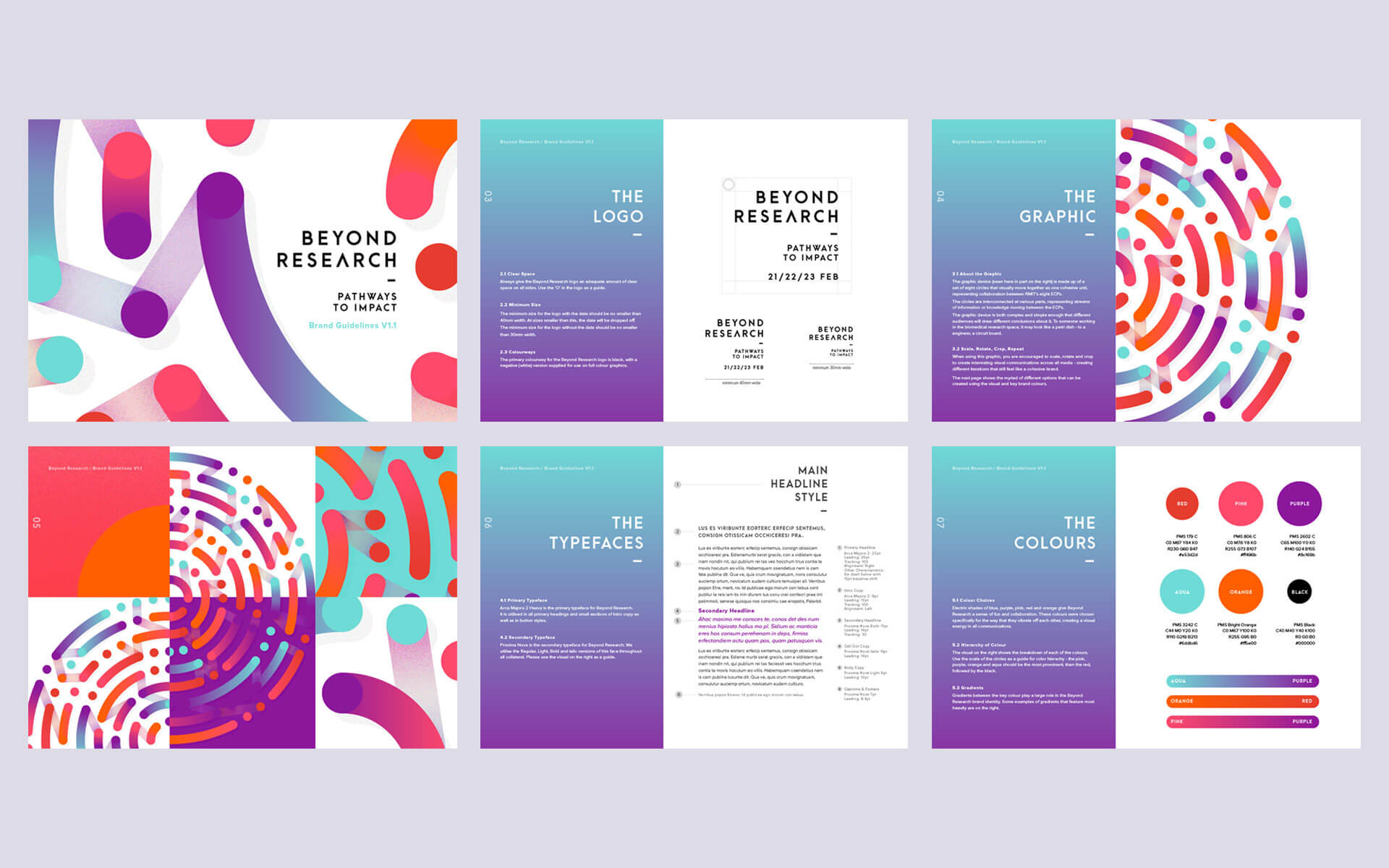 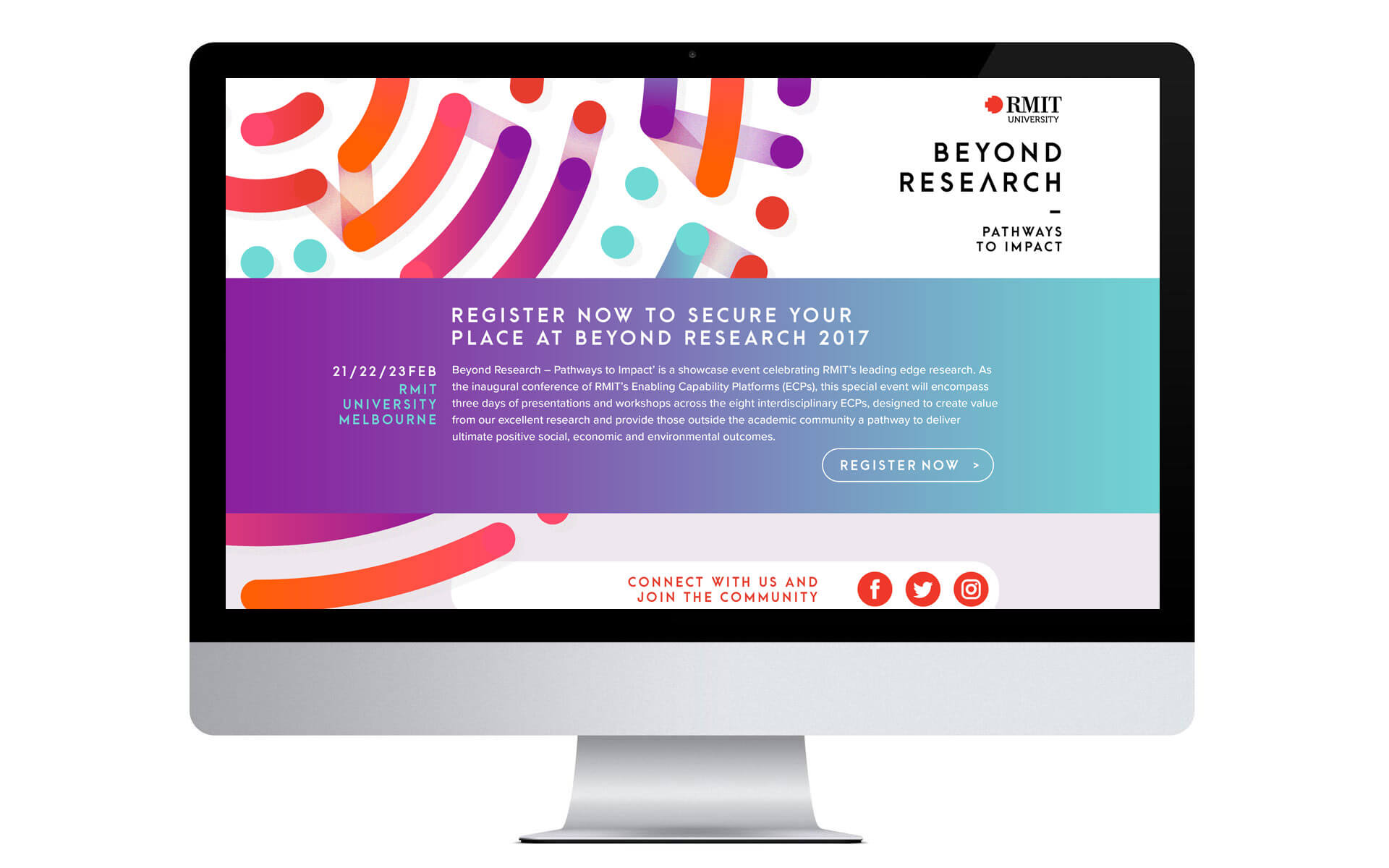 The spatial design of the event became a physical manifestation of the brand for Beyond Research, with design details spreading to floor and wall decals, lighting and staging.

RMIT was committed to producing low-impact, re-usable and recyclable event collateral, such as water bottles and bags, as well as finding solutions to produce as little waste as possible right from promotion to conference close. This vision was translated into action by using minimal disposable packaging and repurposing event signage for future events. Even to this day staff at RMIT keep using the bags and water bottles which proves how beneficial sustainability can be in experience marketing. 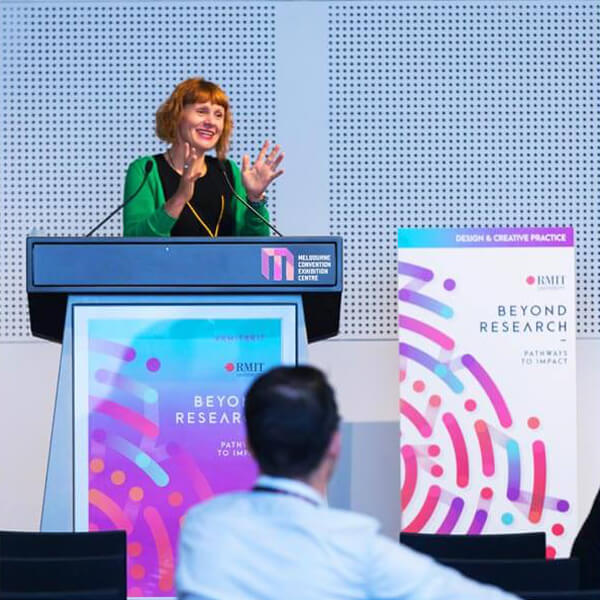 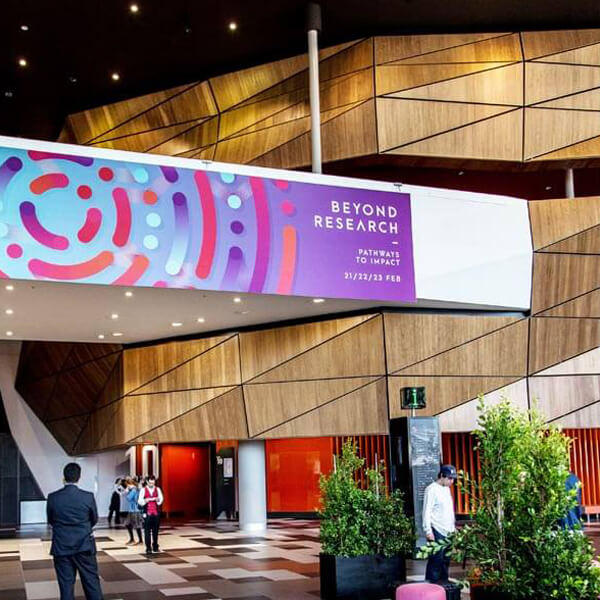 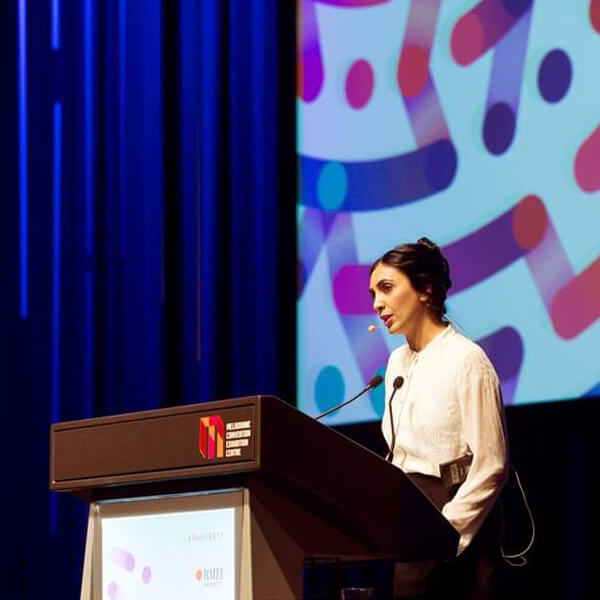 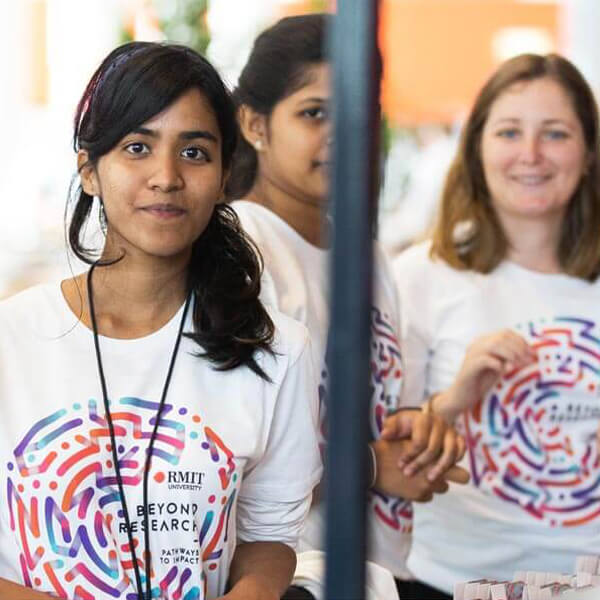 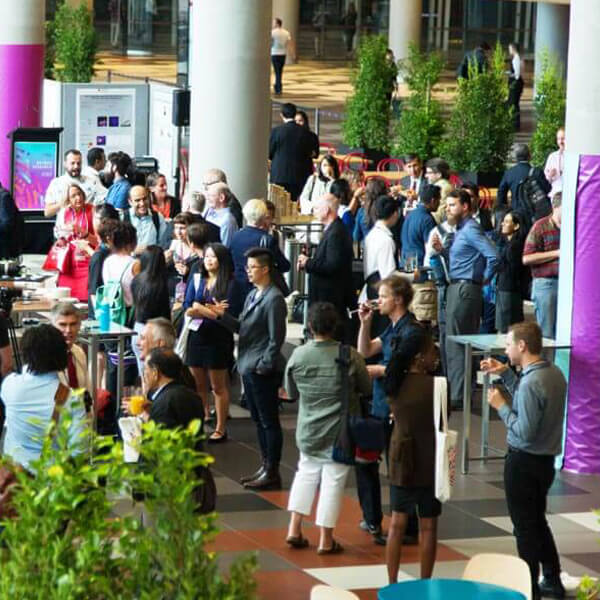 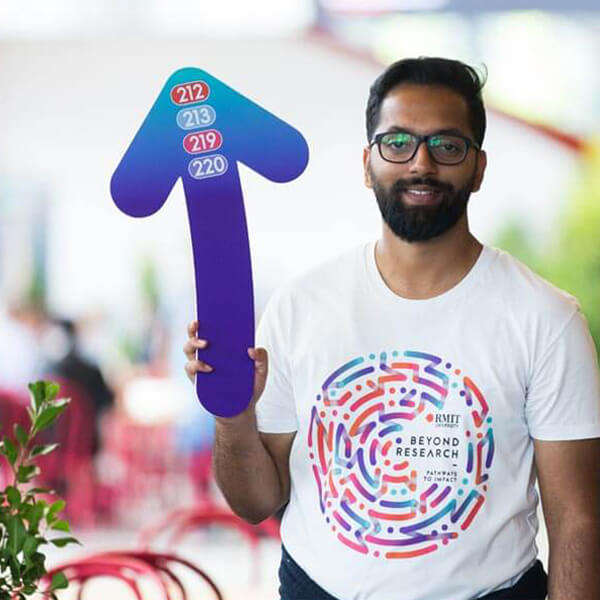 The objectives for this project and Beyond Research included:

Celebrate the diversity of research capability across the university and further enhance the position of RMIT as a leader in the interdisciplinary approach to research.

Continue to evolve a university culture of research translation to benefit others outside the academic community.

Educate industry around RMIT's new approach to research and collaboration.

Demonstrate the value of being involved in the ECPs to students.

Profiling and familiarising the  leadership across research and innovation.

The event was successful in engaging with affiliates in the new cross-disciplinary research platforms and introducing the ECP leadership with a high impact brand and event. The conference had a significant visual and word-of-mouth impact and included spectacular speakers and content, creating a compelling case for change amongst RMIT and its stakeholders. 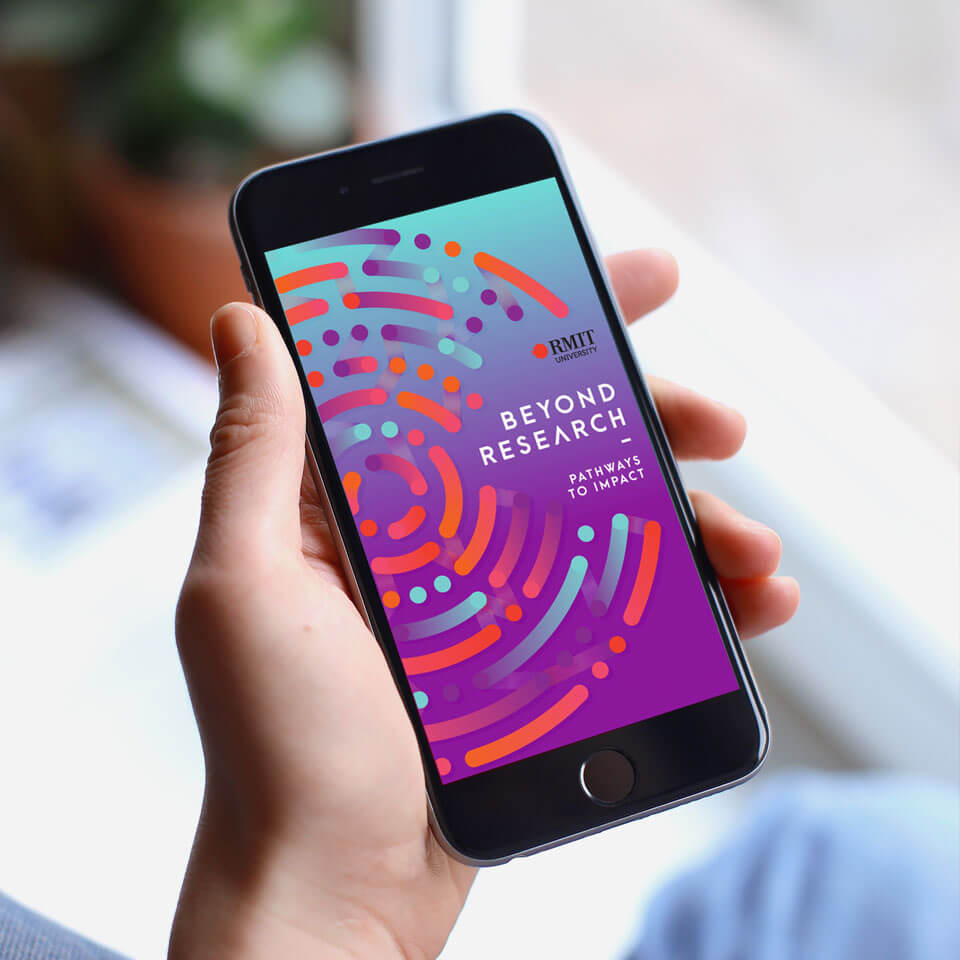 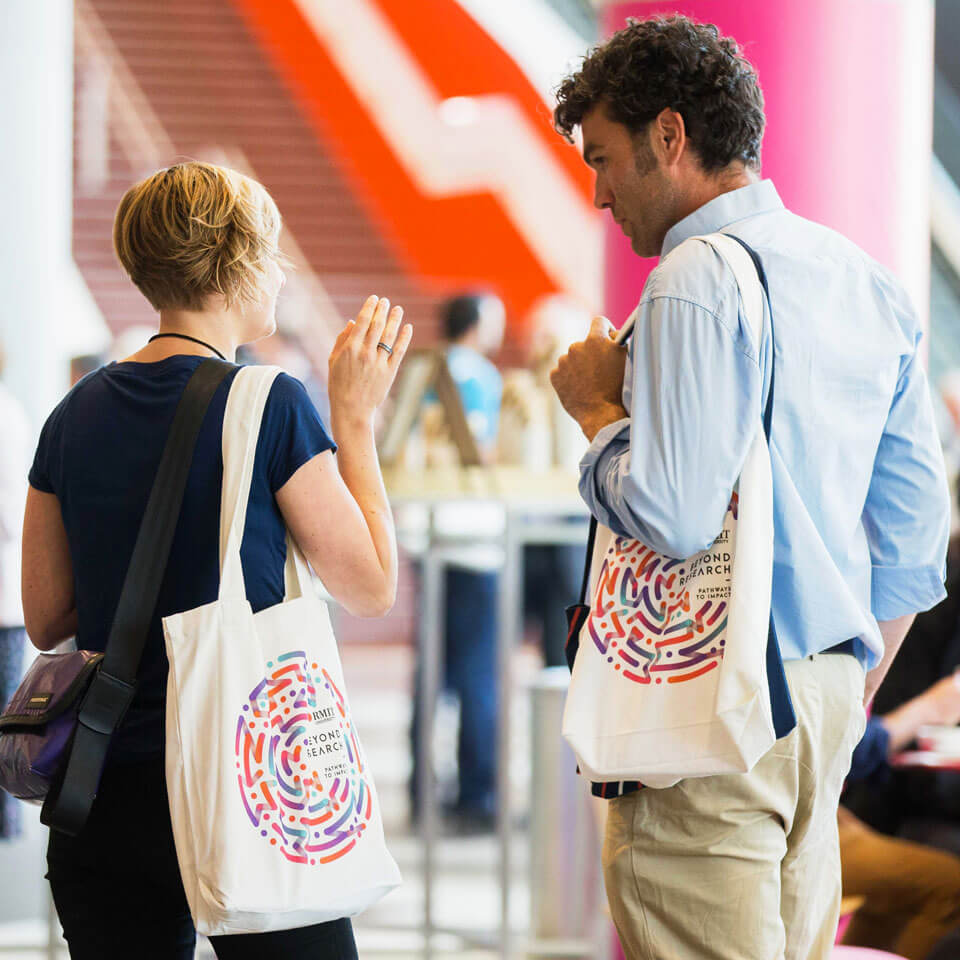 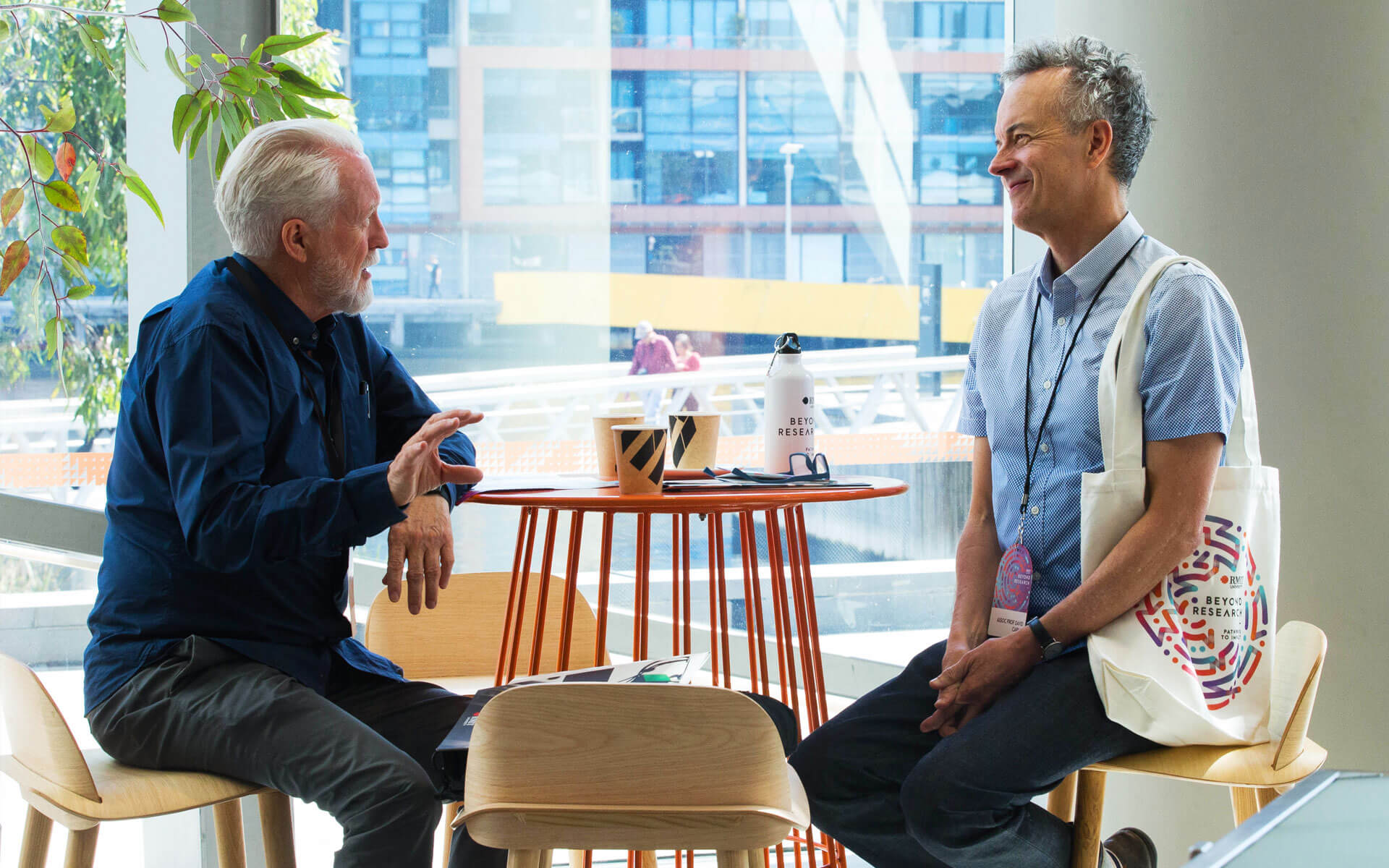 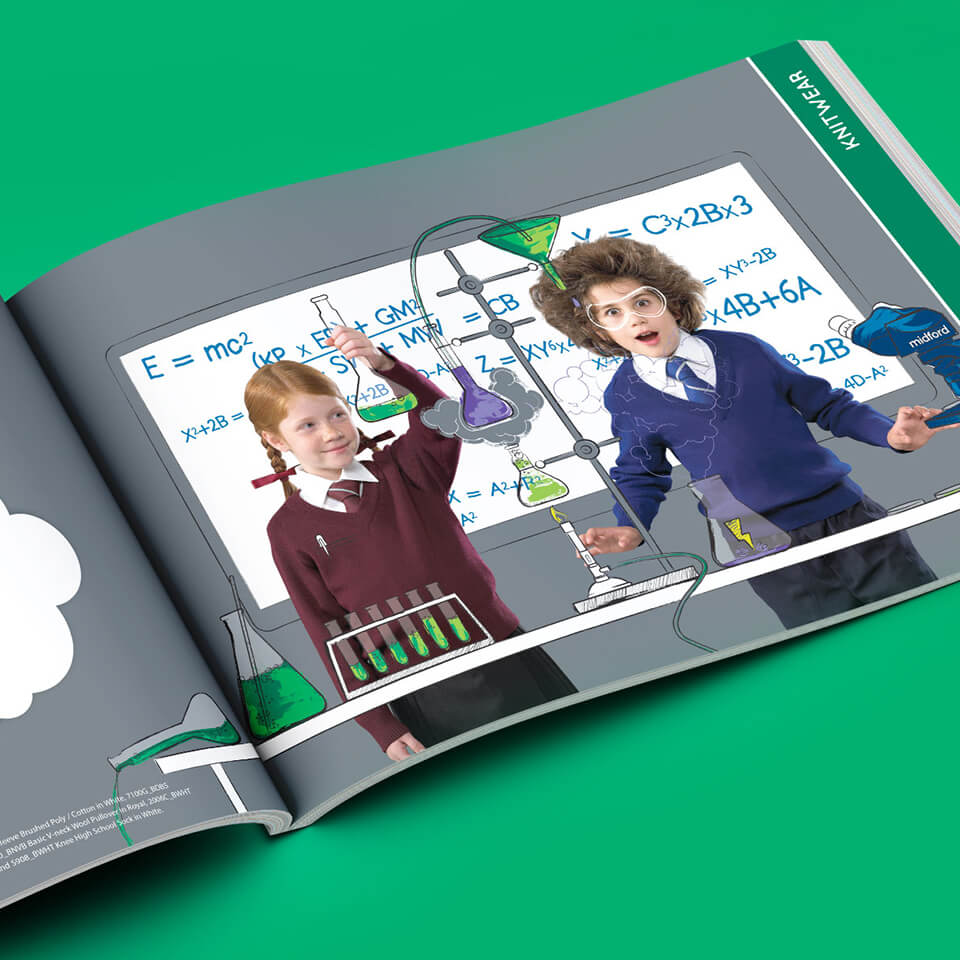 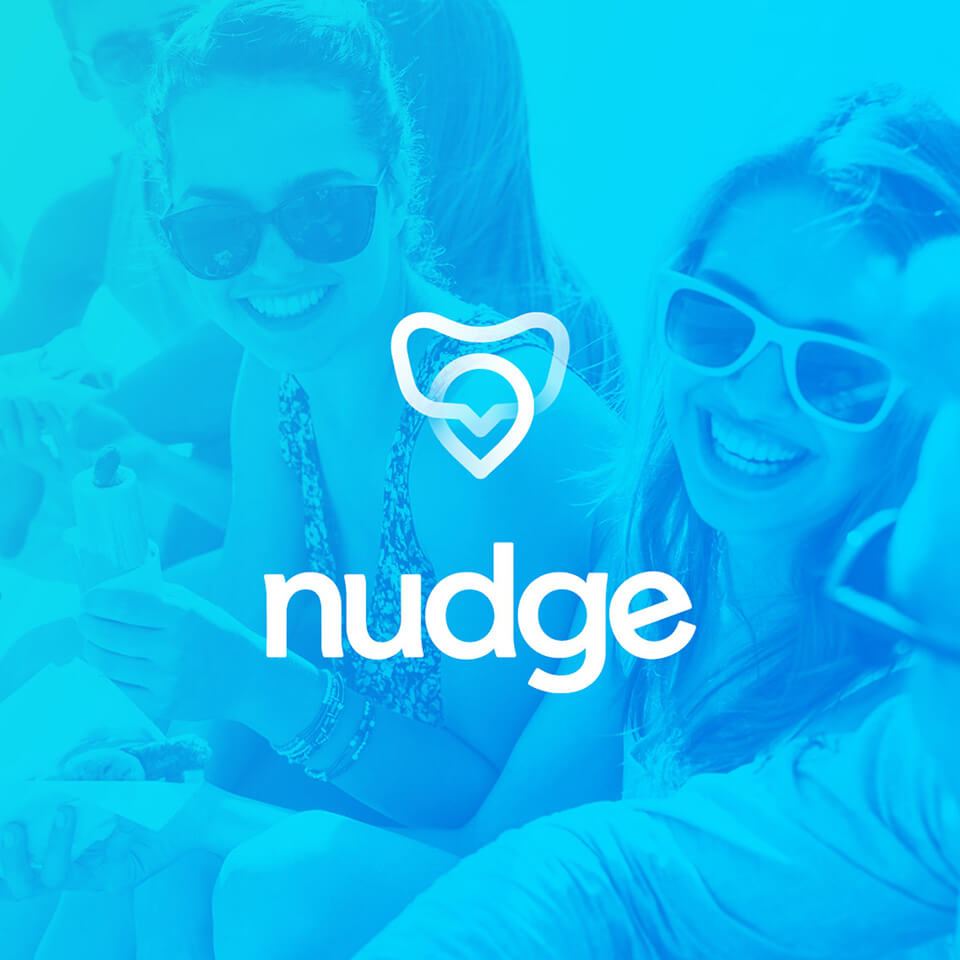 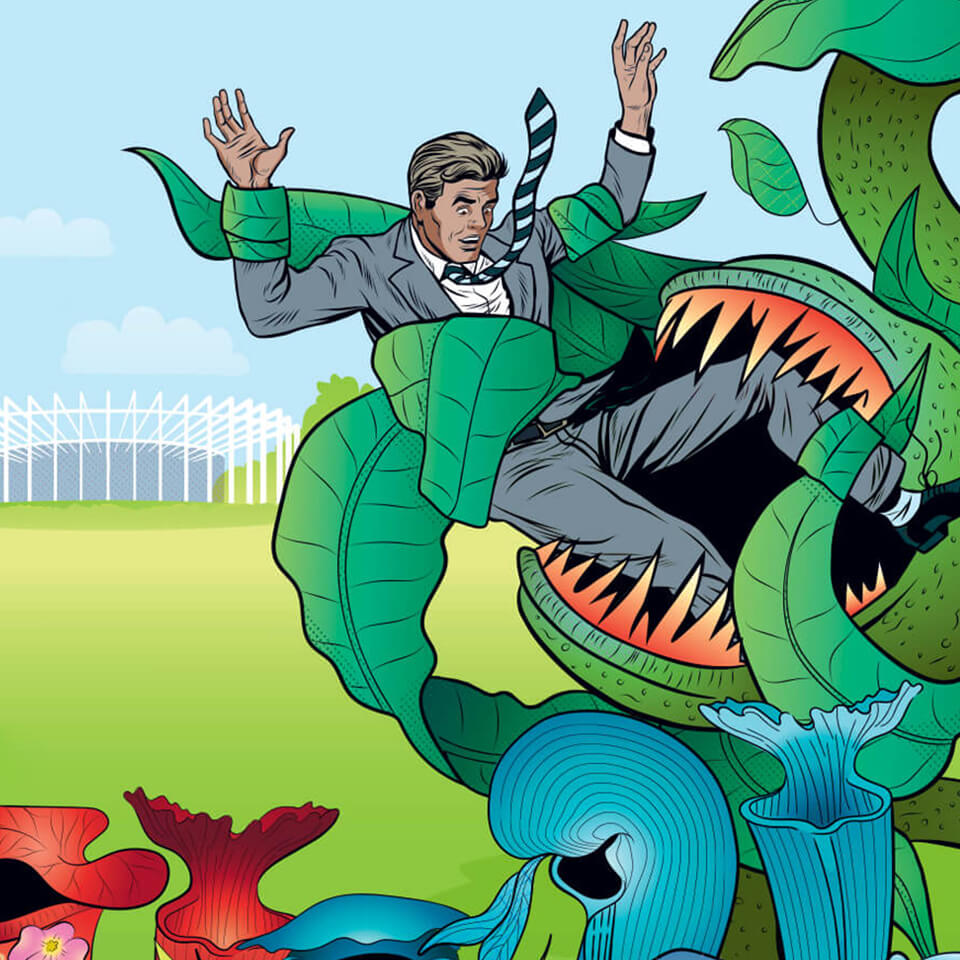